Our friend Simon is the music man! I first met him when he was playing for Tripod Jimmy, one of the best bands to ever come out of Osaka…or anywhere! Since then, he has been in so many different bands, I can’t begin to list them.
His latest band is called Goodman Bad. It features Simon on guitar & vocals, Glenn on bass, and Spleen on drums. 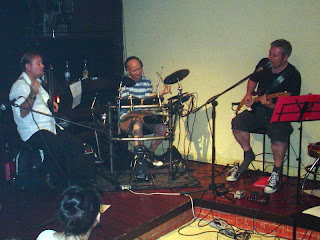 Every month, Simon organises Inner Sky, a concert at Covent Garden, a friendly bar in Kita Horie. This month’s Inner Sky promises to be the loudest ever. Goodman Bad are going to play a fully electric concert. Simon's even going to kick that chair away! 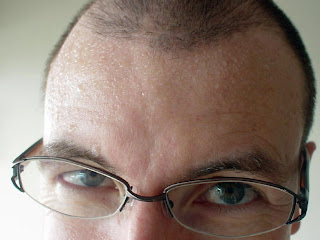 Humidity is the amount of water vapor [like a gas] in the air. The humidity is now very high in Osaka. Everywhere I go, I hear people muttering [talking quitely] to themselves, “Mushi atsu, na!”

In English, we have a few different ways we can say "Mushi atsu!":

“It’s humid!” is the phrase you’re most likely to hear on the TV weather report.

“It’s muggy!” is the phrase you’re more likely to hear on the street.

When it’s this muggy, you don’t feel like doing anything except lying on the sofa under the air-conditioner and watching DVDs. (I highly recommend Shawn of the Dead: A Romantic Comedy - with Zombies) Or going to the seaside.

If going to the seaside is your choice, you’e in luck! This weekend there are two big seaside events being held near Osaka… 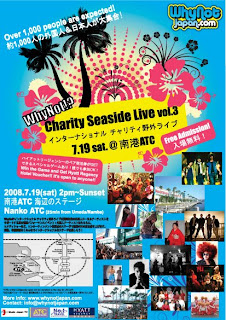 The Seaside Charity Concert at ATC
There will be 16 different performers (bands/singers/dancers) from Tokyo, Nagoya, and Osaka. Last year there were over 1,000 people in the audience. Hopefully, there will be even more this year! Click on the links below to find out more...

Photos from the 2006 Concert

Photos from the 2007 Concert

Absolutely Everything You Want to Know About this Year's Concert! (Information about all the performers, video from last year’s concert, maps, etc.) 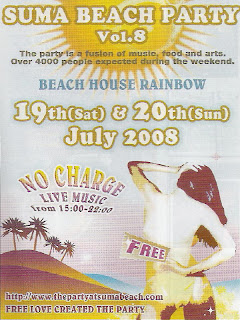 Lots of different performers, food stalls, and lots of dancing on the beach. Last year they had over 4,000 people!

Everything You Want to Know About the Suma Beach Party

A Map to the Suma Beach Party

Whatever you do, enjoy your long weekend! And stay cool!!! 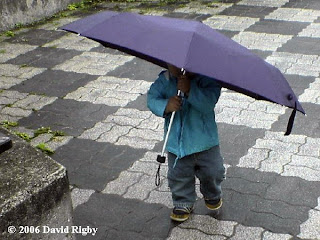 The rainy season is nearly over, however, it seems the heavens decided to give us one last rainy day before it gets really hot.

In English, we have many ways to describe rain…

If it’s only raining a little, just a drop here and there, we say, “It’s spitting.”

If it’s a little heavier, just enough to need an umbrella, we say, “It’s drizzling.”

If it’s much heavier, like it was earlier today, we say, “It’s pouring.”

That last expression originated in England 3 or 4 hundred years ago. Back then, cities were much dirtier than they are now. Buildings were very close together, and people threw their kitchen scraps out their windows. Dogs & cats would live off the scraps that piled up between the buildings. When they died, their bodies stayed stuck between the buildings until very strong rains washed them out into the streets. When people passing by saw the bodies, they would jokingly say the bodies had fallen from the sky with the rain.

Next time it rains, try to describe what type of rain it is using one of the expressions above.
Posted by Be at 1:37 PM No comments:

To check them out, go to http://www.be-and-me.com/ , click on "生徒のみなさんへ" (the Students' Page), then click on "The School Calendar" or "Be & Me Announcements."