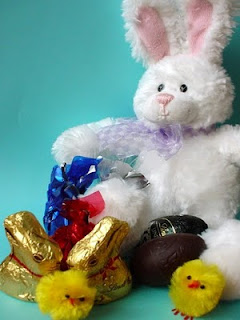 Next Sunday, April 4th, is Easter – the most important Christian holiday.

Easter is closely linked to the Jewish holiday of Passover (people often forget that Jesus was Jewish). The date of Passover is based on a lunar calendar so it changes every year. This year, Passover falls on April 3rd – next Saturday! Christians believe that Jesus Christ was executed [killed by the government] on Good Friday, the day before Passover. Two days later, he came back to life, proving to everyone that he was the Son of God.

Traditionally, children celebrated Easter by decorating hard-boiled eggs and then giving them to friends & family. Recently, children are given gifts of decorated chocolate eggs, rabbits, and chicks. They are told that the chocolates were delivered to their homes by the Easter Bunny early in the morning while they were still sleeping. Some people hold picnics that feature Easter-egg hunts. The picnic organizers hide decorated eggs around the picnic site. Children search for the eggs, trying to find as many as they can. One of the most famous Easter-egg hunts in the world is held at the American White House each year. 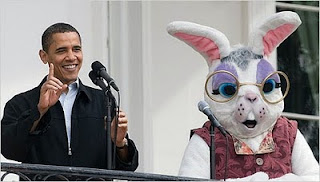 Click here for a video of 2009’s Easter at the White House
The eggs, rabbits & chicks are all symbols of new life used in ancient European spring festivals celebrated thousands of years before the birth of Jesus Christ. Even the name “Easter” comes from these ancient festivals. Eastre was the ancient German goddess of spring. When the Christians came to power in Europe, they took over the old spring festival. They said that the traditional symbols of new life (eggs, rabbits & chicks) now represent Jesus coming back to life.
Even if you’re not Christian, you can still celebrate Easter. It’s easy – just eat some chocolate! In Osaka, you can buy Easter chocolates from Sony Plaza. 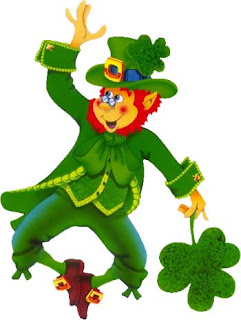 In Ireland, there are many legends about leprechauns, a kind of fairy. In most of these stories, leprechauns are described as old men with red beards who wear green clothes and big hats. They are usually about a meter high, although, in some stories they are said to be about the size of your thumb.

Leprechauns usually live alone. They spend their days in forests and fields looking for forgotten treasures hidden by pirates and Vikings long ago. When they find these treasures, they put them in big pots which they hide near the end of the rainbow.

People rarely see leprechauns because they move so fast. If you do see a leprechaun, he must stop and talk to you. However, if you look away – even for just a moment – he will vanish.

Leprechauns can’t lie, and, if asked, they must show you where their pot of gold is and let you take some of the treasure if you wish to, as long as you promise to let them go. No one has ever managed to get any leprechaun gold because, even though they are very honest, leprechauns like to trick people and play jokes on them. Leprechauns are very clever so they always manage to outsmart the people who catch them.

One famous story tells of a man who promised to let a leprechaun go if he showed him where his gold was hidden. The leprechaun took him to a tree deep in the forest and told him the gold was buried under it. The man had no shovel to dig the gold out with so he tied a ribbon around the tree and made the leprechaun promise not to move the ribbon or the gold. The leprechaun agreed so the man let him go before rushing home to get a shovel. A short time later, he returned to the forest only to find that the leprechaun had tied ribbons to hundreds of other trees. The leprechaun kept his promise – and his gold! 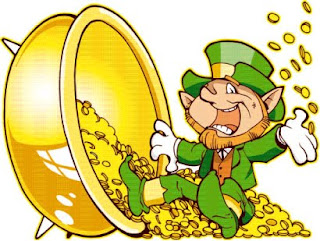 Next time you’re in Ireland, don’t forget to visit The Leprechaun Museum!

In the meantime, look for real leprechauns at Leprechaun Watch

Drinking green beer with some students & friends at Murphy's Irish Pub in Shinsaibasi (I only had a small green beer because I was leaving room for Guinness - the real Irish beer!)
Some customers celebrating Saint Patrick's Day in style
Posted by Be at 10:26 AM No comments: 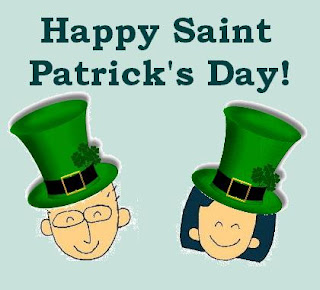 The Blarney Stone (in Umeda)
Hope to see you at Murphy’s tonight! To be sure, to be sure!
Posted by Be at 9:51 AM No comments:

Yesterday's Saint Patrick's Day parade was great fun! You can see some photos at 2010 St. Patrick's Day Parade in Kyoto, Japan
Posted by Be at 10:04 AM No comments:

To find out more, go to the following sites…
Saint Patrick'S Day Parade in Kyoto - http://www.inj-kansai.com/

The Hill of Tara (Irish Pub in Kyoto)

What is Saint Patrick's Day?

Who is Saint Patrick?
Hope to see you there! Too be sure, to be sure!
Posted by Be at 6:44 AM No comments:

What is Saint Patrick's Day? 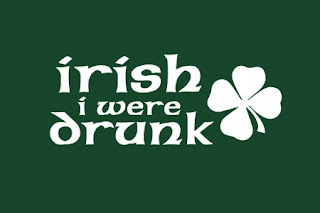 Sounds like "I wish I were drunk"
Next Wednesday (March 17th), is Saint Patrick’s Day, a popular holiday all over the world. Saint Patrick is the patron saint of Ireland. He converted [changed] the Irish to Christianity about 1,550 years ago (read his full story here; Who is Saint Patrick?).

From about 1845 to 1849, there was a great famine [a time when there was no food] in Ireland. About 3,000,000 people died. Also, many people left Ireland looking for a better life in other countries like England, America, & Australia (about 40 million people in America are descendents of Irish immigrants). That’s one of the reasons Saint Patrick’s Day is so popular all over the world.

Saint Patrick’s Day is often celebrated with parades. Green is the national colour of Ireland so the streets are decorated with green banners. The people marching in the parade and the spectators [the people watching] also wear green. Bands play Irish music and people sing Irish songs or do Irish dances. Some people dress as Saint Patrick or as leprechauns. 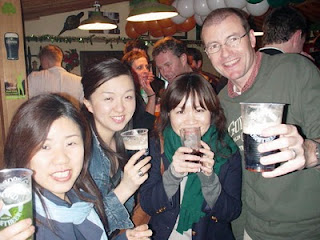 Drinking green beer & Guinness at Murphy's Irish Pub, in Shinsaibashi, last Saint Patrick’s Day. Green is the colour of Ireland. If you visit an Irish pub on Saint Patrick’s Day, you should try a green beer and a Guinness. Green beer is just draft beer with food colouring in it. If you have to choose between the green beer & the Guinness, you should choose the Guinness!
There are two really good Irish bars in Osaka. In Umeda, you should go to The Blarney Stone (click on the name for information and a map). In Shinsaibashi, you should check out Murphy's Irish Pub (once again, click on the name for information and a map)

Happy Saint Patrick’s Day! To be sure, to be sure!
Posted by Be at 6:34 AM No comments:

Who is Saint Patrick? 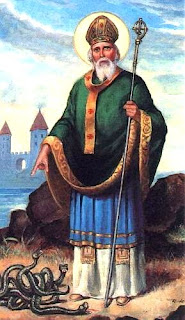 "Did you see all these snakes!"
Saint Patrick’s real name was Maewyn (it is common for people to change their names when the become priests or nuns). He was born in Scotland about 1,550 years ago. When he was 16, he was kidnapped by Irish pirates. They took him to Ireland and made him work as a slave.

Maewyn worked as a slave in Ireland for 6 years before escaping. He made his way to France, where he became a Christian priest. In 431, he became a bishop. The Pope gave him a new name – Patrick – and sent him to Ireland to convert [change] the Irish to Christianity.

In Ireland, Patrick walked from town to town. A man walked in front of him beating on a drum to attracted everybody’s attention. Patrick told the gathering crowds about Jesus Christ and the Christian church. Many of the people became Christians.

Before Patrick came to Ireland, most of the Irish people were pagans [people who believe in many gods]. The pagan priests were called druids. They did not like the idea of Christianity because it said there was only one God – not theirs! The druids and their followers threw stones at Patrick but he didn’t stop telling people about Christianity.

Patrick worked in Ireland for 40 years, turning Ireland into a Christian country. He died on March 17th, 493. Many years later the church declared that he was a saint. March 17th is now celebrated as Saint Patrick's Day.

There are many stories about the miracles that Saint Patrick did while he was traveling through Ireland. The most famous story is that he drove all the snakes out of Ireland by beating on his drum. There are no snakes in Ireland today. (This story may have another meaning. Apparently, the druids used to tattoo their bodies with snakes and use snake images in their rituals. When Patrick brought Christianity to Ireland with his beating drum, he drove the druids – the snake worshipers – away.)
Posted by Be at 6:32 AM No comments: 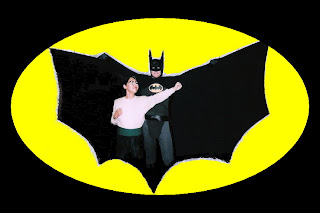 Batman & Astro Boy
Last week wasn't the first time that the Dark Knight was spotted in Shinsaibashi. 14 years ago, Batman and his good friend Astro Boy (A.K.A. [Also Known As] Atom or Atomu) spent a Halloween out and about in Osaka... 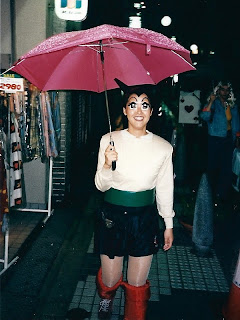 Astro Boy walks the back streets of Shinsabashi in the rain

Batman has a quick bite to eat at the Shinsaibashi McDonalds 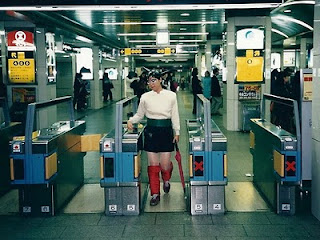 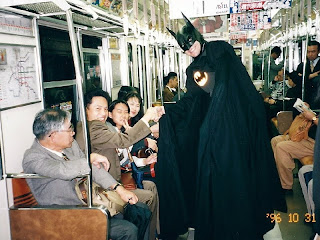 Mayumi recently wrote about that night in Osaka and our favorite heroes on her new Blog. Go to 私のヒーローは・・・？ to read more!
Posted by Be at 8:57 AM No comments:

I was walking down Shinsaibashi Street, in Osaka, earlier this week when I noticed... 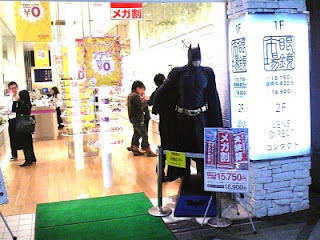 the Dark Knight standing outside a glasses shop 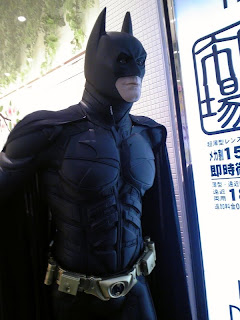 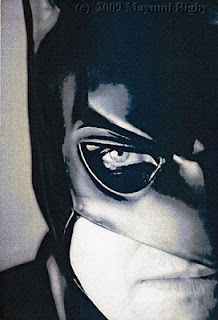 The Batman Movie Theme (Metal Version)
Posted by Be at 8:46 AM No comments: