At 7:30 pm last night, Tomoko, Yuki & I interrupted our lesson for a quick fieldtrip. We went out onto the stairway of the school’s building to check out the Lunar Eclipse I wrote about in yesterday's Blog entry . Luckily, the clouds that had filled the sky for most of the day had cleared… 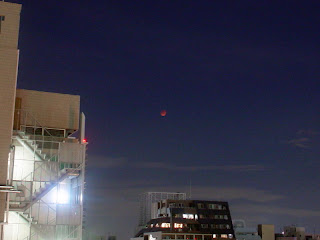 The View from the Stairs 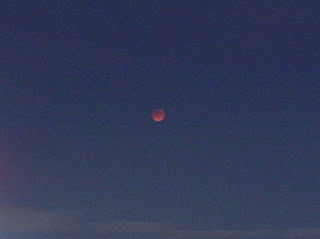 To be honest, the real view was much darker than these pictures. At first we couldn’t see the moon at all. We were about to go back to the classroom when Yuki’s eagle eyes spotted it lurking in the night sky.

Don’t forget to check out yesterday's Blog entry for an explanation of what an eclipse is and an example of how you can use the word “eclipse” in daily conversation!

When the light from the Sun is blocked by a moon or planet, it’s called an “eclipse.”

The most famous kind of eclipse is a solar eclipse, when the light of the Sun is blocked by the Moon. 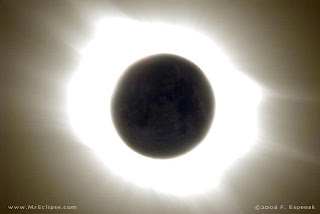 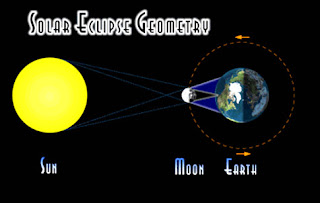 A lunar eclipse is when the light of the Sun is blocked from shining on the Moon by the Earth. 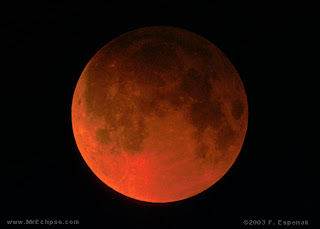 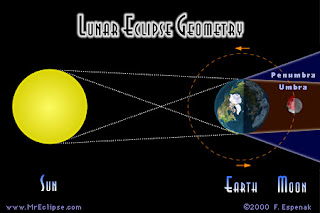 Tonight from 7:00 pm to about 8:30 pm, you should be able to watch a lunar eclipse – if it isn’t too cloudy! Just look for the full moon and then watch it turn red. 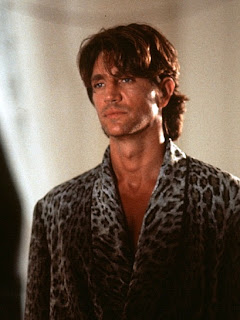 However, he was soon eclipsed by his little sister… 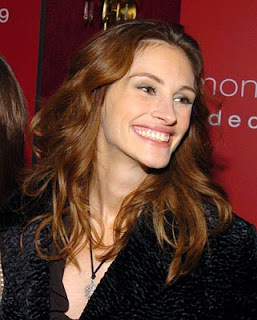 If you want to check out Eric Roberts at his best, I recommend these movies:

The first Kansai International Film Festival (KIFF) starts today. Thirty-two “Japanese Films Made by Foreigners!” will be shown at Planet Station, in Morinomiya.

The film categories include: Documentary, Culture-Clash, Experimental, The Dark Side, Wabi-Sabi ("Japanese" films), and more. The directors come from ten different countries, and will no doubt present a view of Japan quite different from that in the mainstream Japanese media.

My friend Rik Sanchez will be there giving away DVDs of Nylon, a short film he made with writer/director/actor Kevin Karn. If you see him, go up & say, “Hello!” (He’s the guy with chilli peppers tattooed on his arm.) If you are friendly enough, he might give you a DVD.

KIFF organizer Darryl Knickrehm will be one of the featured filmmakers. His work Rodosha will be shown twice. Other featured works include Reggie Life’s Doubles, Junko Kajino and Ed Koziarski’s Homesick Blues, Rachael Lucas’s Bondi Tsunami, and many, many more. I’ve heard especially good things about Bondi Tsunami.

Details can be found on the KIFF websites:

kansaifilm.com
Cell phone users
Place: Planet Station (map and address in Japanese here) in Morinomiya, which is on the Osaka loop line.

It's free! What are you waiting for?

By the way, I was in a rush this morning so I stole this entry from Japan Visitor Blog. Sorry, Guys!
Posted by Be at 10:02 AM No comments: 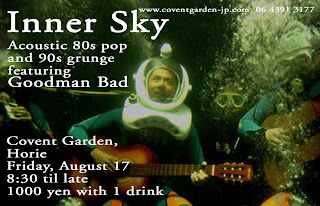 Our friend Simon organises a monthly concert called Inner Sky. The next Inner Sky is on this Friday, August 17th, at Covent Garden, in Horie.

Acoustic 80s pop and 90s grunge will be provided by Goodman Bad –this time Simon on guitar is joined by bass stalwart Glen Gregus, back in Japan after many years of pro engagements in Australia, and Eric Wiegman of The Native Tongues on percussion, so the sound should be full and danceable.

That night will also feature a couple of Simon’s friends' birthdays, so a build-in crowd of rowdy drinkers will help bring the party up to speed.

Today is the first day of my summer holidays – woo-woo! It’s only 6 days, but boy am I ready!

The Be & Me Eikaiwa Club will open again on Saturday, August 18th. If you’re missing your English lessons, you should check out English at Home.com. This site has lots of different material you can use to study English at home. 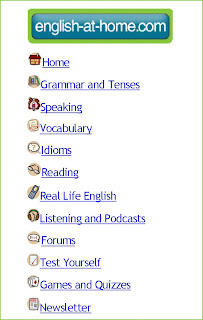 The Menu Selection from English at Home.com
Unfortunately, their listening-practice page isn’t working yet. If you want to download some short Podcasts to practice your listening with, don’t forget to check out Listen to English.com . (If you’re a Harry Potter fan, you should go straight to Harry Potter and the Deathly Hallows. While you’re there, don’t forget to click on the “Grammar Note” at the bottom of the entry – it’s very important!)
And speaking of Harry Potter, You can find a bunch of [a lot] our Harry Potter-themed Halloween photos on the following links:
Halloween 2001 at Mito's Bar

(Don’t forget to check out the 2nd & 3rd pages of each of those links!)

Enjoy your holidays!
Posted by Be at 7:07 AM No comments: 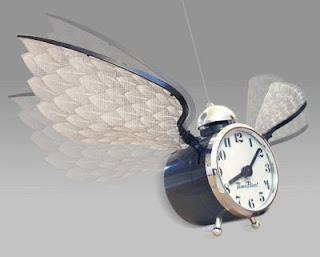 Wow! What happened to the last 2 weeks? They just seemed to fly by! In English, we often say that “time flies when we’re having fun.” This means that when we are having fun, time passes quickly. I’m not too sure if I’ve been having fun in the last 2 weeks (2 months!) – I’ve been too busy to notice! Actually, since the beginning of June, I’ve been flat out like a lizard drinking! (Click on the expression to find out what it means.)

Oh, well! The summer holidays are just around the corner [coming soon]. Hopefully, I’ll find the time to put some more interesting posts on this Blog!

By the way, in British English instead of saying “2 weeks,” we often say “fortnight.”

Also, if for some reason you want to buy the clock in the photo, click here! However, please remember that it’s not a real clock – just a toy!