Our friend Simon hosts a regular concert called Inner Sky at Covent Garden, a really relaxed and friendly bar in Kita Horie. May’s Inner Sky is this Saturday, the 26th, from 8:30 pm. 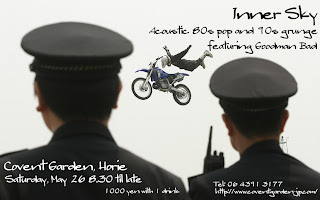 As you can see on the flyer, there’s a door charge of 1,000 yen. That includes one drink. After that, you pay for all drinks & food as you order.

A group of Be & Me students went to the March Inner Sky. You can check out some photos from that night at Inner Sky Photos !

In Golden Week, I watched American Splendor, the true story of filing clerk & comic book writer Harvey Pekar. (I wrote about it at A Golden Week at the Movies.)

My friend Peter (in one of only 3 comments ever written by anyone on this Blog!) said it was his favourite movie of 2003.

If you’re interested in seeing this movie, I have some good news! It’s going to be broadcast on NHK BS2 tonight from 9:00 pm. Don’t miss it! 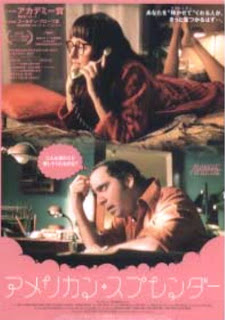 You can read more about the movie (in Japanese) at American Splendor Review
Posted by Be at 7:46 AM No comments:

During Golden Week, my family & I went to Iga Ueno, the birthplace of ninjitsu. Iga Ueno is very proud of its history. There are ninjas everywhere – in shop windows, hanging off streetlights, painted on trains, and so on. There are even entire families of ninjas walking the streets. 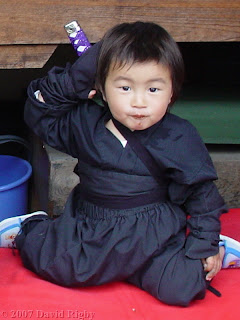 A Little Ninja strikes a pose 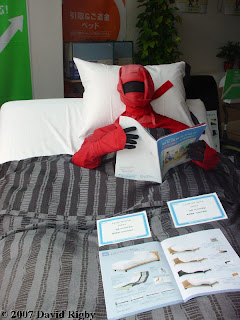 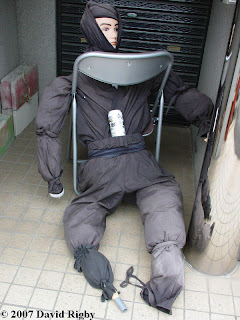 Actually, he’s not really legless – more like footless! “Legless” is another way of saying “really, really drunk.” When you’re really, really drunk, you sometimes can’t even stand up. When that happens, it seems like you have no legs – you are legless!
By the way, that can of beer was already there when I spotted this ninja.
Also, You can find out more about Iga Ueno at Iga Ueno Tourist Information
Posted by Be at 9:50 AM No comments:

A Golden Week of Movies

Wow! Golden Week is nearly over! What happened?

As most of you probably know, Golden Week is a collection of unrelated holidays that all fall around the same time. Depending on the year, they can result in either a couple of long weekends or an entire week off. The name comes from a promotion carried out by the cinemas on one of the years that they had a whole week off. The promotion is long gone but the name lives on.

Since our son was born, we haven’t been able to watch many movies, even at home. Luckily, this week he let us watch two.

The first was "American Splendor." Most movies are about extraordinary [special] people (like Superman or Spiderman) or ordinary people who do extraordinary things. “American Splendor” is a true story about some pretty geeky people [A “geek” is a strange person who is often very unfashionable – in Japanese you say “Otaku] who lead ordinary lives. The movie is part drama, part animation, and part documentary. It seems very depressing at first but it has a surprisingly uplifting [it makes you feel good because it has a positive message] ending. Do yourself a favour [I recommend you watch it!] 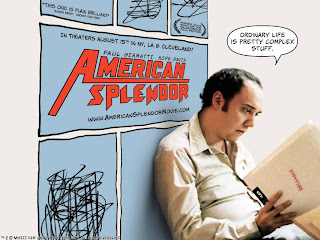 You can get information about this movie in Japanese by clicking on "American Splendor"
There’s also an interesting short review in the style of the movie (in English) at "American Splendor” Review
We rewarded our son for his patience by watching "Superman Returns," which, while set in Metropolis, was actually filmed in Sydney. It's another surprisingly good movie (directed by Bryan Singer, who also directed "the Usual Suspects"). The highlight – for us at least! – was when Superman, having saved the world from disaster by exposing himself to lethal [deadly] doses [amounts] of Kryptonite [a special crystal that can kill Superman] (believe me -- It's better than it sounds!), passes out in space. His body re-enters the atmosphere and he falls to earth, landing in a park, on almost the exact spot where my sister got married last October! What a hoot! [It was very, very funny] 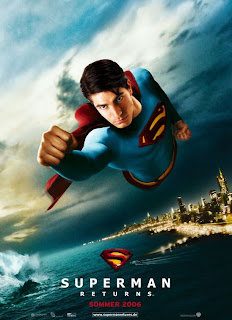