On April 20th, 1770, Captain James Cook and the crew of his ship, HMS Endeavour, became the first Europeans to see the east coast of what we now call Australia. He named the land New South Wales, after his homeland of South Wales, and claimed it for Britain.

Back in England, the jails were overflowing with prisoners. Despite the fact that Captain Cook had made contact with the Aborigines, the British declared that New South Wales was uninhabited [no one lived there] and sent 11 ships full of prisoners there to start a colony. These ships are now known as the First Fleet. The First Fleet arrived in Sydney on January 26th, 1788 – 219 years ago today! 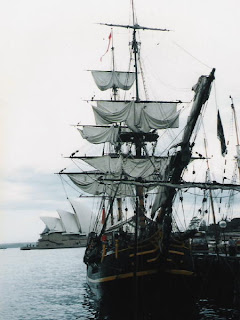 A ship like one of the First Fleet in modern-day Sydney Harbour.

January 26th is now celebrated as Australia Day, a national public holiday that is marked by special events around the country. Many towns & cities hold special ceremonies & fireworks displays. The Prime Minister of Australia gives a special address to the nation [a speech that is broadcast on TV & radio stations], and special awards are presented to Australians who have done good things. Also on this day, there is usually a special cricket match, as well as some big outdoor music festivals. 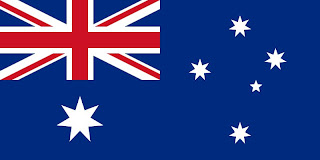 The Australian Flag – The Union Jack [British Flag] represents Australia's connection to Britain; the 7-pointed star, the 7 states of Australia; and the other stars, the Southern Cross [ a group of stars you can usually see from the southern half of the Earth].

Not everyone thinks that Australia Day should be a celebration! Aborigines hold “Invasion Day” and “Survival Day” events, protesting the fact that their country was invaded [taken over by force] by the British and celebrating that their people & culture somehow survived. 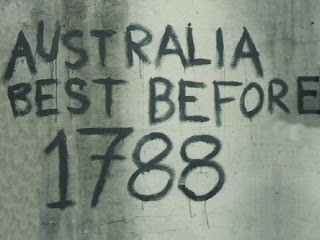 Some anti-Australia Day graffiti on a wall in the Rocks, the oldest part of Sydney. 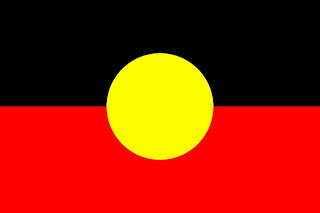 The Australian Aboriginal Flag – The black represents the people; the red, their land & blood; and the yellow, their sun.
Posted by Be at 9:04 AM No comments:

Last August, the International Astronomical Union, a group of scientists specialising in the study of the planets and the stars, decided that Pluto should not be counted as one of the Sun’s planets anymore. This was mainly because recently other bodies have been found in our solar system that are nearly as big or even bigger than Pluto. We can expect many more to be found in the near future. If we keep calling Pluto a planet, we’ll have to add many new names to the list.

Every year, the American Dialect Society, a group of teachers, writers, and editors, chooses a newly created English word as “Word of the Year.” This year they chose the new adjective Plutoed, which means to be demoted or lowered in value.

Here’s an example: David Beckham has been Plutoed by Real since announcing that he is moving to America in June. 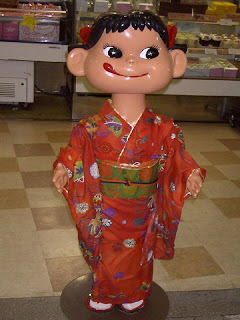 One of my New Year's resolutions last year (or was it the year before?) was to get some of my photos published [printed in a book or magazine]. To this end, I entered some photos in a couple of on-line photo contests. One of them was Japanzine's "Gaijin Eye" contest. Unfortunately, none of my photos were chosen for the main pages, however, one of my photos was used as a column-filler... 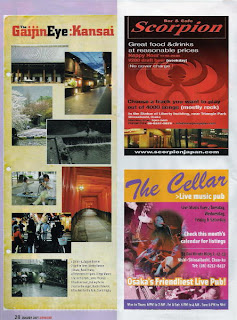 Page 28 of this month's Japanzine

Page 28 of this month's Japanzine – up close!

Here’s a link to their main selection: The Gaijin Eye

And here's the link to my Japazine entries: My Entries

I know any kind of judgement is very arbitrary [a personal choice not based on clear rules] but, to be honest, I didn't think "Too Wet for the Park" was my best photo. Of course, I understand that maybe it wasn't chosen purely on its photographic merits [good points] – it might have had something to do with their desire to show a cross-section [variety] of images of the Kansai.

You can also check out all 800-odd entries at: All Entries

Anyway, my new New Year's resolution is to get published in a size that doesn't need a magnifying glass be viewed! 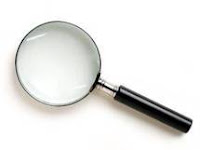 As a lot of you probably made “study English” or “study English more” one of your New Year's resolutions, I’ve decided to recommend a few TV shows that might help you out. Actually, I don’t really believe that TV is a very good teacher. When you watch TV, your mind becomes very passive – the information just flows over you but you don’t really remember it. If you don’t believe me, think of the last time that you watched news on TV. Probably less than a day ago, right? OK, think of 3 stories from that program. You can’t do it, can you? There were definitely more than 3 stories covered in that broadcast but your brain doesn’t remember them. (This is also one of the reasons that watching TV news is not as important as all the TV companies want you to believe it is – but that’s another topic!)

However, even though I don’t think TV is a good teacher, I do think it’s good at reinforcing what you already know in a fun way. It’s important that you study a little English every day. In the long run, half an hour of study every day will have more effect than 3 to 4 hours of study only once a week. Watching interesting & fun English-content TV shows can help you to spread your study throughout the week – especially if you work hard to make your mind more active while you are watching! 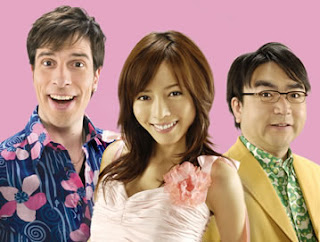 The Regular Cast of "Eigo De Shabera Night"
A great way to make watching the show more active is to cover the Japanese subtitles during the interview, and then check out how much you could understand by reading the transcript on the HomePage the next day. Then, choose a useful phrase or word from the transcript and write 3 new sentences using it.

One of my wife’s favorite regular guests on that show is hard-rocker Marty Friedman (click on his name to visit his HomePage). He’s going to be a regular presenter on a new show called “Jukebox Eikaiwa,” on NHK (channel 12) from 11:10 pm on Thursday nights. Marty and the other presenters are going to studying the meaning of famous song lyrics. I often do this is in Be & Me lessons – it’s a fun way to learn new words and phrases! 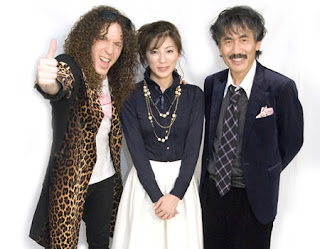 The Regular Cast of "Jukebox Eikaiwa"

Have fun! But remember: Don’t just sit there – get active! 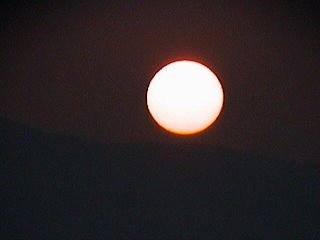 The New Year's Sunrise - 3 years ago!
First of all: Happy New Year!

If you’re reading this in Japan, you probably celebrated the new year by eating lots of traditional food, visiting a shrine to make your first prayers, and reading New Year’s greeting cards, before settling in for a lazy day in front of the TV.

For people in Western countries, New Year’s Eve is actually more important than New Year’s Day – we prefer to “wash away” the old year (with lots of beer & champagne) rather than greet the new one. Most people spend New Year's Day sleeping off a massive hangover and vowing [making a really strong promise] to never drink that much again.

Most people start the year by making some really strong promises. We call them New Year’s resolutions. A resolution is a really strong promise you make to yourself to do something difficult that is good for you. Some common examples of New Year’s Resolutions are “I will lose weight” or “I will study English more.” Good resolutions include some kind of number and time frame so that the achievement of the resolution can be measured. Instead of “I will lose weight,” you should say, “I will lose one kilogram a month” or “I will go to the gym 3 times a week.”

So, here’s one of my New Year’s resolutions: I will make an entry on this Blog at least once a week. “At least” means this is the minimum – I might make more than one entry a week, but I must make one every week!

Of course, I have some other resolutions. I’ll share another one with you in my next entry.