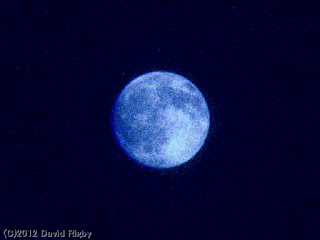 Usually, there is one full moon in every month.  However, occasionally there can be 2 full moons in a month.  This only happens very rarely.  In English, we call the second full moon of the month a Blue Moon*.  Because Blue Moons happen so rarely, we can use the expression "once in a Blue Moon" to mean "only rarely" or "not often."  For example...


I study Japanese once in a Blue Moon.  (It's sad but true!)

John: How often do you go to the movies?

Yoko: Once in a Blue Moon.

*****
This month, there was a full moon on the 2nd.  There will be another full moon tomorrow, August 31st.  Therefore, tomorrow will be a Blue Moon.  Try to do something you don't often do tomorrow.  Once you've done it, you can say, "I only do that once in a Blue Moon!"
*This is a modern definition of Blue Moon dating from 1946.  The traditional definition, which is thousands of years old, is the 3rd full moon of a season with 4 full moons.  Farmers would measure the seasons by counting the full moons.  Usually, it was time to change seasons after 3 full moons.  However, the extra full moon that sometimes happens would confuse them.  They called the 3rd full moon a Belewe Moon.  Belewe is Old English for "liar," that 3rd full moon was a "Liar Moon!"  Somehow, "belewe" was replaced with "blue" in modern English and the original meaning was forgotten.
By the way, Blue Moons are not really blue!  I changed the color of the moon in the above photo using an image-editing program. 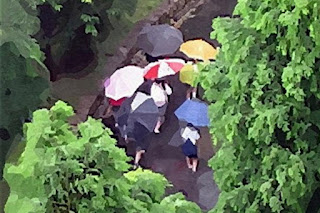 Did you have a fun summer holiday?  Be ＆Me 英会話 Club's lessons start again today.  Looking forward to seeing you soon!
Posted by Be at 8:41 AM No comments:

Be ＆ Me 英会話 Club on Summer Holidays 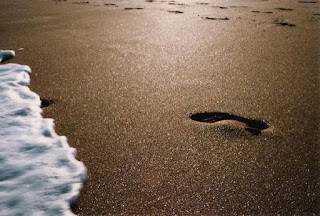 We are on holidays!  Our classes will start again next Saturday, August 18th.  Enjoy your summer holidays!

Go here for more information about the above photo:

How Do You Say "Hanabi" (花火) in English? 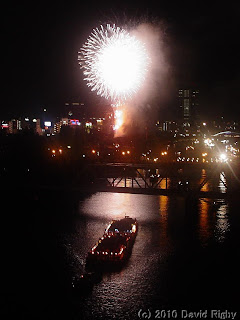 In Japanese, "hanabi" (花火) means fireworks.  The literal translation of “hanabi” is “flower fire,” which is a great name!  Unfortunately, it means nothing in English.
Tomorrow night, they are holding the Yodogawa Fireworks Festival in Osaka.  Enjoy the fireworks tomorrow night!
Posted by Be at 7:05 AM No comments: 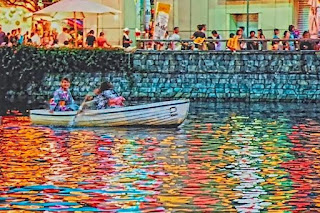