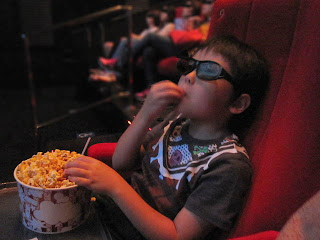 Last Sunday, my family & I went to see Men in Black 3 in 3D.  It was our first 3D movie.  We liked the movie.  It had an interesting story & lots of good actors & funny scenes.  Unfortunately, we didn't like the 3D effect so much.  It made the movie look fake.

The "D" in 3D stands for "dimension."  A photo or normal TV only has 2 dimensions -- it's wide and high.  A 3D movie looks wide, high & deep.  Sometimes, I see amusement parks advertising 4D movies.  What they really mean is 3D plus some kind of physical effect -- water, wind, heat, and so on.  In science, the 4th dimension is time.  Men in Black 3's story is all about time travel, so I guess it's a kind of "4D" movie!

By the way, I was once a Man in Black!  Watch the video below to see why I'm not one now!
Andy Warhol said that we'd all be famous for 15 minutes.  I'm doing my 15 minutes in 2-minute bursts!  Here I am doing my best Tommy Lee Jones impersonation on Japanese TV.

My friend Dave was originally asked to do this "Men in Black" parody for the Japanese comedy duo "Football Hour" by his friend James.  Dave couldn't do it because of work commitments so he offered it to me.  I agreed to do it on the condition that I didn't have to speak.  They assured me it was a non-speaking part.  They lied.

On the day of the shoot, after much cajoling, I agreed to do one line.  I was also told we'd be called "Agent J" & "Agent K" on camera.  However, that information wasn't passed on to the comedians.  First, they started calling us by our real names.  Next, they seemed to expect that I had memorized more lines.  I was really thrown!  Thankfully, they were very kind to me when they edited the show together.  There's more to this video, but I think this is a good place to stop.

By the way, James speaks excellent Japanese.  He was asked to "dumb down" his Japanese for this TV spot. 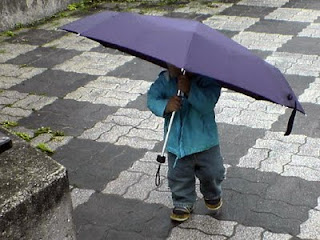