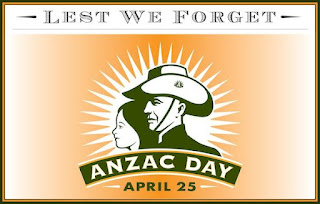 Today is Anzac Day, an important holiday in Australia & New Zealand.  Click here for more information in English & Japanese.
Posted by Be at 8:43 AM No comments: 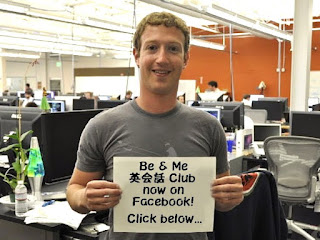 
We are using Facebook to promote this Saturday's cooking lesson. For more information, go to http://www.facebook.com/events

Feel free to share these links with your friends! 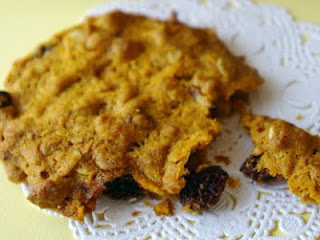 Next Wednesday, April 25th, is Anzac Day, an important holiday in Australia & New Zealand. One of the traditions of Anzac Day is eating Anzac biscuits (a kind of healthy cookie).

This Saturday, April 21st, Mayumi is hosting an Anzac Biscuit Cooking Lesson at the Tsurumi Kumin Center in Yokozutsumi, Osaka. The cooking lesson is a Me & Mine mother-&-child English conversation class event, however, all are welcome! The cooking lesson will be held in Japanese. You don't have to speak English to take part in this event. English translation will be available for any non-Japanese speakers who wish to join. Click Here for More Information! 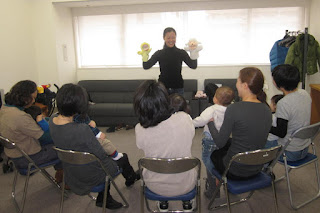 Mayumi Teaching a "Me & Mine" Class
Be & Me Eikaiwa Club (Be & Me 英会話 Club) teaches English conversation to adults & kids in our funky home-style classroom in Shinsaibashi, Osaka. We also teach adults & kids at the Tsurumi Kumin Center in Yokozutsumi, Osaka, on Tuesdays.


Recently, Mayumi (the "Me" in Be & Me) has started teaching mother-and-child classes at the Kumin Center on Tuesday mornings. She calls these classes "Me & Mine". Click Here for More Information! 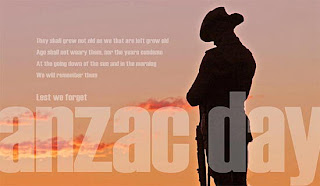 
The Anzacs first fought together in World War One. April 25th, 1915, is the day the Anzacs first landed at Gallipoli, in Turkey. Their goal was to travel inland from Gallipoli and take Istanbul, the capital of the Ottoman Empire, which was helping Germany in the war.

Unfortunately, the plan didn’t work. The Anzacs were stuck on the beach at Gallipoli for 8 months. Conditions were very bad. Many soldiers - both the Anzacs and the defending Turks - were wounded. Many others got sick. Finally, the Anzacs had to retreat. In that time, more than 8,000 Australian and 2,700 New Zealand soldiers were killed.

Australia and New Zealand were relatively “new” countries. Even though the Gallipoli attack had been a failure, the determination and sacrifice of the Anzacs had a big impact on the national identity of both countries.

Anzac Day starts with a dawn service (a Christian ceremony to remember the dead, held at dawn [just as the sun begins to rise]). Later in the morning, parades are held in almost every town and city across both countries. Veterans [returned soldiers] march through the streets followed by active soldiers, and other uniformed service groups. The parades usually finish at monuments remembering the war dead, where more ceremonies are held. As part of these ceremonies, wreaths [circles of flowers] are placed at the feet of the monuments and buglers play “The Last Post” [a very sad sounding piece of music]. 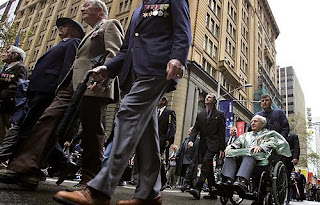 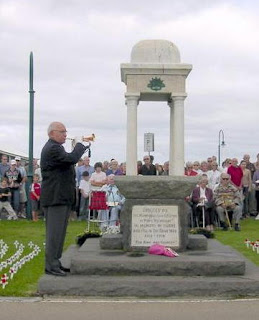 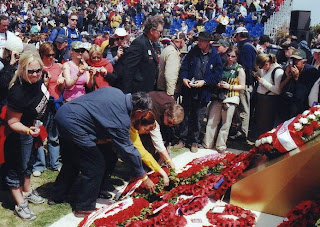 People lay wreaths
In the afternoon (or the weekend before), various sporting events are held to commemorate the day. The most notable of these is the Anzac Test Match, a rugby league game played between the Australian and New Zealand national teams.

After all the ceremonies and games are finished, parties are held for the veterans. These parties often take place in pubs or Returned Servicemen’s Clubs (RSL’s). During the First World War, soldiers often relaxed by playing gambling games. The most popular game was “Two-Up,” a simple coin-tossing game. Although it’s now illegal, games of “Two-Up” are usually an important part of the veterans’ parties. 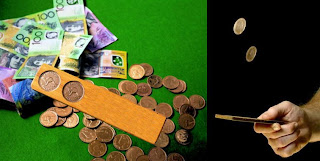 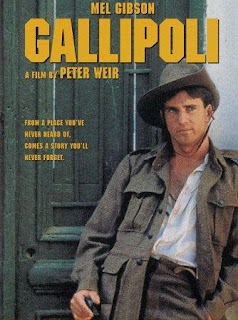 The 1981 Peter Weir movie Gallipoli is a moving retelling of the Anzac story. This movie is also famous for introducing a very young Mel Gibson to international audiences.
このブログ の日 本語訳はこちら をクリックしてください！
Posted by Be at 8:27 AM No comments: 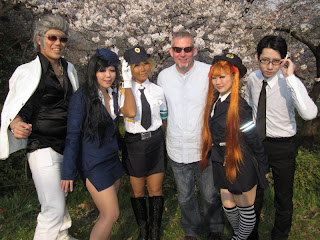 I recently posted some pictures of our cherry blossom-viewing/Easter egg-hunting picnic. One of the pictures I didn't post was this one of our friend Simon Yates with some cosplayers.


This Saturday (April 14th), Simon will be playing live music with a couple of his friends at Andy's Imagine, a cool little bar in Rokkomichi, near Kobe.

Here are the details...

Who? Beermoth (that's the band's name): Simon Yates on guitar & vocals, Gareth Tame on bass, & Shin-chan on drums
Where? Andy's Imagine (090-1133-1501) in Rokkomichi, near Kobe - Click here for map
When? Saturday, April 14th, from 8:00 - 10:00 pm
How much? It's free! The band are playing for tips. Throw some money in the jar to thank them for sharing their time & talent!
Free Tequila! Yes! Kind of! It's free when you buy your first beer (as long as you buy your first beer before 8:30 pm!). It gets more expensive as it gets later in the night. So get there EARLY!

I will definitely be there! I hope to see you there, too!
Posted by Be at 12:17 PM No comments:

A Video from Last Sunday's Picnic 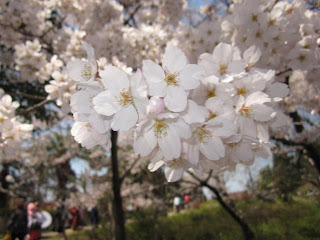 The park was full of cherry blossoms... 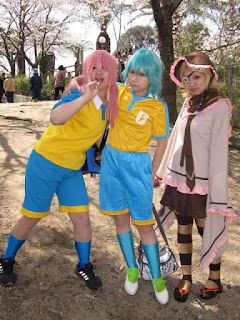 ...and Cosplayers (I have never seen so many!) 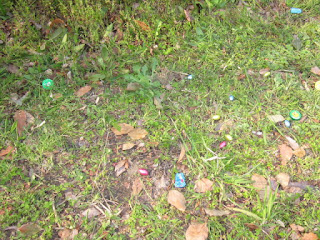 It was Easter Sunday so we organized an egg hunt 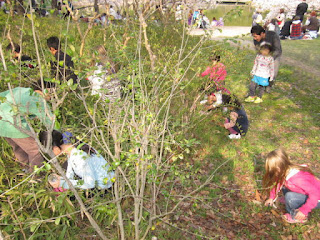 The kids hunting for eggs 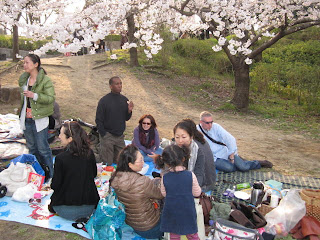 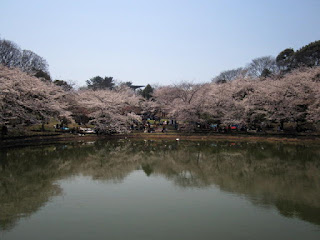 The sakura-lined pond in the Japanese garden at Tsurumi Ryokuchi Park in Osaka, Japan
Posted by Be at 9:10 AM No comments: 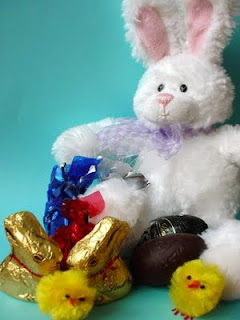 This Sunday, April 8th, is Easter – the most important Christian holiday.Easter is closely linked to the Jewish holiday of Passover (people often forget that Jesus was Jewish). The date of Passover is based on a lunar calendar so it changes every year. This year, Passover falls on April 7th – this Saturday! Christians believe that Jesus Christ was executed [killed by the government] on Good Friday, the day before Passover. Two days later, he came back to life, proving to everyone that he was the Son of God.Traditionally, children celebrated Easter by decorating hard-boiled eggs and then giving them to friends & family. Recently, children are given gifts of decorated chocolate eggs, rabbits, and chicks. They are told that the chocolates were delivered to their homes by the Easter Bunny early in the morning while they were still sleeping. Some people hold picnics that feature Easter-egg hunts. The picnic organizers hide decorated eggs around the picnic site. Children search for the eggs, trying to find as many as they can. One of the most famous Easter-egg hunts in the world is held at the American White House each year. 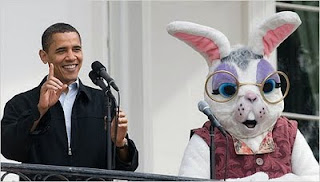 President Obama with the Easter Bunny at the White House

Here are some highlights from 2009's Easter Sunday at the White House...

The eggs, rabbits & chicks are all symbols of new life used in ancient European spring festivals celebrated thousands of years before the birth of Jesus Christ. Even the name “Easter” comes from these ancient festivals. Eastre was the ancient German goddess of spring. When the Christians came to power in Europe, they took over the old spring festival. They said that the traditional symbols of new life (eggs, rabbits & chicks) now represent Jesus coming back to life.
Even if you’re not Christian, you can still celebrate Easter. It’s easy – just eat some chocolate!
このブログ の日 本語訳はこちら をクリックしてください！ 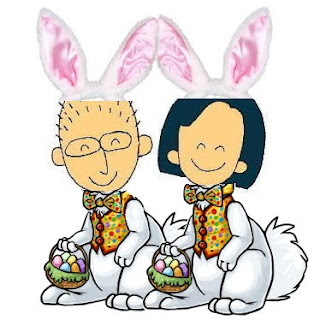