Be & Me Student Writes to President Obama!

このブログの日 本語訳はこちら をクリックしてください！
Recently, I was talking to Noriko, one of our students, about international affairs. Noriko believes in a nuclear weapon-free world. She was very disappointed that President Obama, who also believes in a nuclear weapon-free world, did so poorly in the American mid-term elections. She said she wanted to write a letter of support to him. So, that’s what she did! 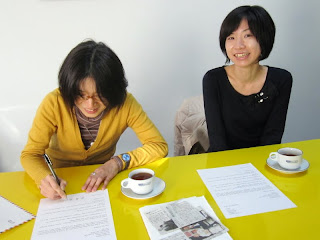 Keiko, one of our other students, watches Noriko signing her letter to President Obama 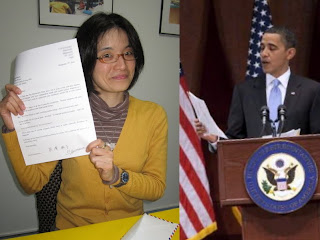 Here’s what she wrote…

I’m sorry to hear that the Democratic Party lost a lot of seats in this mid-term election. Most American people who have independent minds and regard nuclear weapons as a deterrent can’t or don’t want to understand your healthcare reform bill or your nuclear policy.

I think the 21st Century is an era of peaceful coexistence. Nuclear weapons and spent nuclear fuel are negative assets from human beings.

We – all living things on earth, including human beings – have to respect each other.

Some people say it’s just an ideal. So what? To translate ideals into reality – that’s the aim of politics.

When there are no nuclear weapons, please come to Japan, especially Hiroshima & Nagasaki.

In Kyoto, let me treat you to delicious macha ice cream. Let’s celebrate the victory of a nuclear-free world.

***
After signing the letter, Noriko decided to include a photo of some green-tea ice cream… 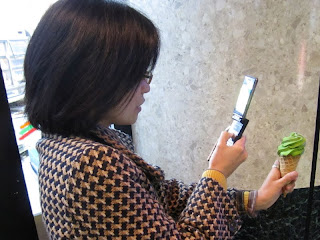 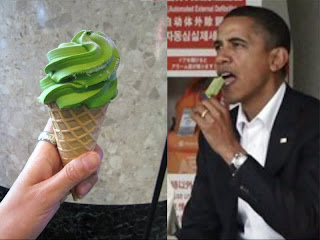 Next time President Obama comes to Japan, he might eat Noriko’s green-tea ice cream instead of a green-tea popsicle

Which world leader would you like to write to?
What would you say to them?

The Last Word on Halloween


Check out the video from our Kids' Halloween Picnic in Tsurumi Ryokuchi Park by clicking on the arrow above or clicking Here!

You can check photos by clicking on Halloween Picnic (2010)

The Second-last Word on Halloween

I finally posted some of our photos from the Halloween party at Ola Tacos Bar.
Click on Halloween Party at Ola (2010) to check them out! 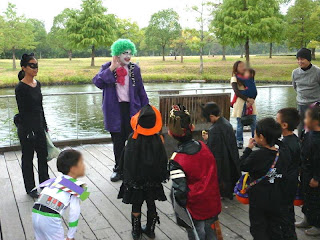 I hope to have the photos from the Be & Me Halloween Picnic for kids posted in a day or two.
Posted by Be at 7:45 AM No comments: