It’s Halloween! This evening, all across Ameirica and Canada, as well as other parts of the world, children will be dressing up like ghosts, witches, skeletons, and other interesting people or things. 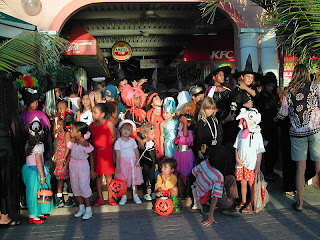 Some kids in Halloween costumes
The children will go from door to door and yell, “Trick or treat?” Their neighbors will give them special Halloween candies, cookies or fruit. If they are refused a treat, the children might play a trick on that person. A common trick is to cover their house with toilet paper. 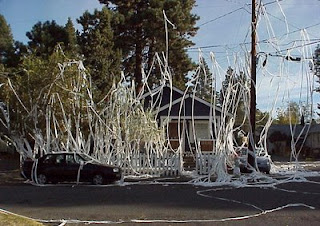 Halloween has its origins in an ancient Celtic festival known as Samhain. The Celts lived in Ireland and Scotland thousands of years ago – long before the birth of Christ. The festival of Samhain was a celebration of the end of the harvest season. The festival was celebrated after the harvest was sorted and stored away. It is also sometimes regarded as the end of the Celtic year.

The ancient Celts were very superstitious. They believed that on the last day of the year (around October 31st, according to their calendar) the spirits of the dead came back to this world. They were scared of these ghosts. They wore costumes and masks to trick the evil spirits into thinking they were also ghost, hoping that the real ghosts would leave them alone.

The most famous symbol of Halloween is the Jack-o-lantern, a hollowed out pumpkin with a scary face carved in it. Originally, Jack-o-lanterns were made from turnips.

There is an old Irish story about a bad man called Jack who tricked the Devil into never taking him to hell. (Read the full story here.) However, this trick eventually backfired. When he finally died, he could not enter Heaven or Hell. Jack found himself doomed to walk the earth at night, guided only by the light of a burning coal – a gift from the Devil – in a turnip lantern.

This story was the Celts’ attempt to explain the phantom flames they sometimes saw burning over bogs and moors. (In Japan, these flames used to sometimes appear over graveyards. They were caused by methane gas escaping from rotting bodies or wood. In Japanese, these flames are known as hino tama.)